When Dominic Weiss first walked into High Sky Cafe (47 South Old Orchard Ave, Webster Groves; 314-962-5757), he was just a neighborhood kid looking for a gig to take care of the tables. Now, after three decades working at the restaurant and its former sister concepts, Weiss walks through the doors of Big Sky with a much different job title: restaurant owner.

On Monday, longtime Big Sky owner Tim Mallett announced on Facebook that he had sold the restaurant he founded in 1992 to Weiss. Citing a desire to retire from the restaurant business after 45 years, Mallett praised Weiss as “a defender of Big Sky in the face of the challenges of the past two years”, stating that “there is no better man for carry on the traditions of Big Sky Cafe and no one who cares more about the staff and customers than they deserve.”

For Weiss, the opportunity to take over such a legendary institution is both exciting and humbling. Although he had no idea how far he would go in the business when he started at Big Sky just weeks after opening, Weiss worked his way up the ranks, working his way through the kitchen and eventually into both internal and internal leadership positions. His tenure at Mallett also extended to the restaurateur’s other brands; Weiss has held senior positions at Blue Water Grill, Ellie Forcella and Remy’s Kitchen and Wine Bar. 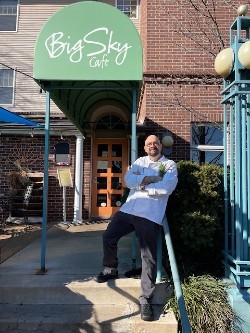 Just over a decade ago, Weiss walked away from Mallett’s restaurant group to pursue opportunities outside of the restaurant industry. However, as he found himself missing out on the hospitality business, he returned to Big Sky, taking on a temporary role that was only to last eight weeks. As he likes to joke, he never left.

“Tim told me he had a short-term opportunity for me if I was still looking to get back into the business,” Weiss said. “One of his employees was going to be on sick leave, and he asked me if I wanted to work the door as a host and take care of the dining room. I said, ‘Sure. , why not? so in a way, I always cover for someone who was supposed to be away for a short time because I didn’t leave.”

As Weiss explains, the return experience made him realize he wanted to stay at Big Sky permanently. He began to take on more and more responsibility, and eventually he and Mallett started talking about him taking over the restaurant one day. Originally they thought it would be a five year plan, but they continued as usual for about a decade. Finally, in early 2020, Mallett decided he was ready to move on.

“Even before the pandemic, we started talking about it a lot more seriously,” Weiss says. “He got to the point where he was ready to retire and he was like, ‘So are you ready?’ I thought, yeah, I guess so. That’s what we were going to do, wasn’t it?”

Mallett and Weiss may have finalized the details of the sale recently, but the new owner insists he will always look to his former boss for advice. Referring to Mallett as a dear mentor and friend, Weiss is grateful for his guidance throughout the transition, as well as his willingness to help in any way he can as long as Weiss needs it. Weiss admits that while he wants to respect Mallett’s retirement, he has no intention of stopping calling him to ask his opinion on things, and he’s confident that Mallett will always be there for him. and the restaurant.

Weiss also stresses that he has no plans to make any dramatic changes to Big Sky. Given his institutional knowledge of the place, as well as his respect for what Mallett has created, Weiss feels he has a responsibility to make things work the way they always have.

“My plan is to be a brand steward,” says Weiss. “I am extremely proud of what Big Sky is and of myself. Having had the opportunity to lead Big Sky over the past ten years, I feel there is a lot of me in what it is now. Of course a lot of that comes from Tim so I don’t have any big left turns on the horizon My immediate goal is to lead the brand and continue to grow and stay relevant and continue to be what the people could count in the thirty years we’ve been here. We want to have new things on a regular basis as we’ve always strived to do, and we want there to be a reason to come in and see what we’re doing it differently, but we’re going to stay Big Ciel.”

We are always eager for advice and feedback. Email the author at [email protected]