Fount Board & Table in Uptown was meant to be a cozy cafe by day and a cheese and wine bar by night. That has always been Olivia Genthe’s vision for her business when she and her husband Ryan Genthe opened it in late 2019 in a small craftsman-style house on Routh Street.

But zoning issues have kept her from selling booze, so she’s taking a different approach. Later this month, Fount will launch a completely alcohol-free bar program featuring wine proxies, seasonal cocktails, and beers — all alcohol-free.

“We kind of operate with a phantom member because a lot of what we originally wanted to do was cheese and wine, but that just didn’t happen,” Genthe said.

They began the process of rezoning to sell alcohol when they moved into their building that previously housed the Crooked Tree Coffeehouse, but the Uptown neighborhood blocked their rezoning attempt, Genthe said. She said she understood their reasoning for doing so and was pivoting her plans.

“We did a bit of introspection. When we had to rotate our menu, we really started wondering what made us feel good,” she said. “We’ve tried to keep something very strong from a welfare point of view, and that’s a lot of what we’re doing anyway. I think everyone is sort of reassessing how and what we consume in all aspects of our lives.

Instead of a typical bar program, Genthe said they’ve designed one around drinks that are better for you but aren’t sad substitutes for booze. They will have non-alcoholic stouts, IPAs, bourbon, turmeric Bloody Marys, arugula spritzes, dandelion martinis, candied lemon margaritas and Acid League vinegar wines to go with the food. They will also have a bar stocked with bitters and sodas to whip up a range of mixed drinks.

Genthe is quick to point out that Fount isn’t anti-alcohol and she really doesn’t like the term “sober bar.” Sobriety is personal, she says, and it doesn’t matter why someone opts for soft drinks. She just wants to provide a place where people can enjoy really good soft drinks.

“You can have a really sexy, romantic, non-booze-grounded social space,” she said.

The cafe is currently open from 7 a.m. to 5 p.m. on Sundays, Mondays and Tuesdays and from 7 a.m. to 7 p.m. from Wednesday to Saturday. Once the bar program kicks off in mid to late April, hours will extend to 10 p.m. and possibly even later next summer. 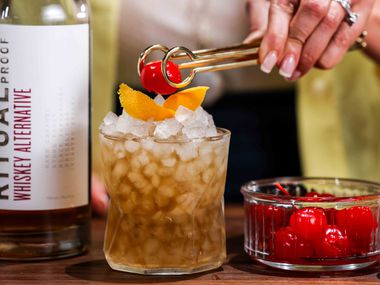