Last year, when Oak closed, it was the end of a pretty good 10-year run for the spot in the Design District. Many renowned chefs had run the kitchen, including Jason Maddy and Brian Zenner.

Now the owners of the space, Apheleia Restaurant Group (ARG) – PakPao, El Bolero and Hawthorn – have opened a new concept, Wits Steakhouse. According to a press release, it is a modern, traditional yet creative steakhouse that offers South African-inspired dishes.

Richard Ellman, the founder of ARG, was born on the southern coast of Africa and returned to his family roots to find inspiration for this spot. “My parents were also born and raised in South Africa, so the story runs deep in my past,” Ellman said in a press release.

The name, Wits, refers to the University of the Witwatersrand, which Ellmans’ mother attended and which is in an area that is home to some of the largest gold mines in the world. The theme is carried throughout the space (lots of gold decor) and on the food and drink menus.

Biltong is a South African-style beef jerky with Windhoek beer from Namibia.

On the entrees menu, there’s a Prime New York Strip (14 ounces, $78) and a steak tomahawk ($120) with house sauces including a cognac peppercorn, béarnaise or truffle butter. The peri peri shrimp ($37) is served with roasted peppers, garlic and red onion. There’s a New Zealand rack of lamb and a South African braai, which is grilled chicken with roasted peppers and Jerusalem artichokes. A black truffle burger is served with truffle aioli and truffle shavings. There are also lobster meatballs, black cod and duck fat fried chicken.

In addition to all this, there is a sushi menu. 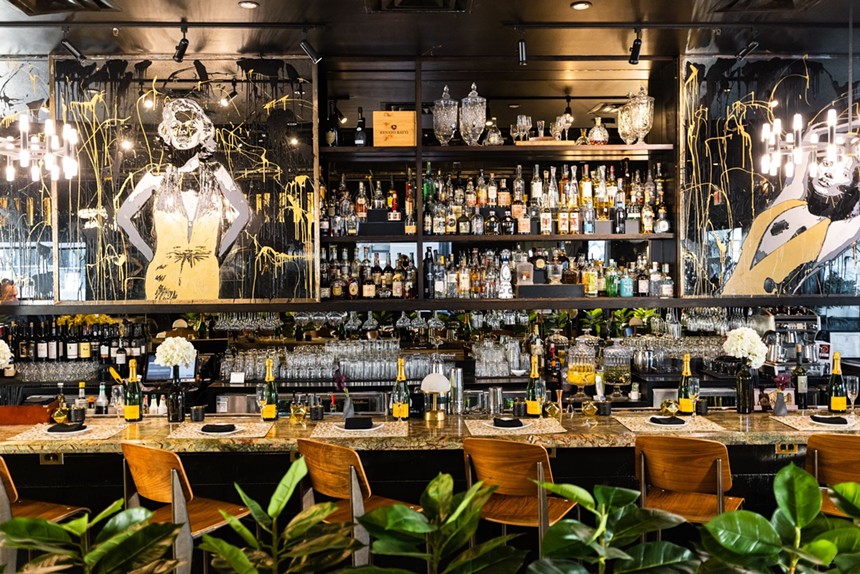 The renovated bar at Wits Steakhouse

The cocktail menu embraces the gold mine theme. There is a Gold Digger cocktail made with JCB Truffle vodka, Mathilde Poir gold caviar and Perrier-Jouët Champagne. The Mine Cart serves four to six people and is made with Herradura Legend Anejo tequila, Grand Marnier Cuvée 1880, Aur’a Natural Gold Water, Yuzu Lemon, and Manuka Honey.

They will also have South African beers and wines by the glass and bottle.

There is no mention of who the leader is. We’ve reached out, and if we hear back, we’ll update.

Update: The Executive Chef is Jeremy Lewis, who was most recently Executive Sous Chef at Whiskey Cake, and Sous Chef at True Food Kitchen and III Forks before that.