Hamishe and Natasha Bahrami are ready to start their next chapter.

For the past 39 years, Hamishe Bahrami has cared for diners in St. Louis, first through the small kitchen and then, although the hugely popular Persian mainstay, Natasha cafe (3200 Grand Boulevard South, 314-771-3411). Now, the beloved matriarch is ready for the next chapter of her life, and by extension, so is the restaurant: Café Natasha’s will close permanently after service on April 30.

Natasha Bahrami, Bahrami’s daughter and owner of the adjacent Gin Room, says the decision, while incredibly emotional, is the best for their family, as ending Cafe Natasha’s is the only way her mother can retire – something that has been a long time comes and is necessary for the well-being of his mom.

“This idea isn’t new. We’ve been trying to thoughtfully retire mom for a few years,” Natasha said. “She has dedicated her life to this industry and caring for others, and she loves it. She loves her guests and the St. Louis community, but now is the time for her to be able to live her life. We can’t go on without her, and she can’t let it go on without her.”

Bahrami never intended to become one of the most respected and valued members of the St. Louis food and beverage community; in fact, she never imagined herself entering the restaurant industry until she had to do it to survive. Originally from Iran, Bahrami was a nurse who traveled around her home country and the world for her job before moving to New York in the 1970s. A city-dweller who loved to dance at Studio 54, Bahrami n had no intention of settling down until she was wooed by the man who would become her husband, the late Behshid Bahrami.

Behshid had moved to St. Louis from Iran a few years earlier and had a successful career as a fundamentalist geologist. Ready to settle down and start a family, he had heard of Bahrami through mutual friends and family and was determined to make her his partner in life. The two began courting — initially somewhat one-sided, Natasha laughs — and eventually Bahrami agreed to move to St. Louis. The two got married shortly after the move and welcomed Natasha soon after.

The Bahramis had no intention of going into restoration, but they were forced into it when Behshid was cut from his job as a geologist in the early 1980s. As Natasha explains, the economic downturn at that time was the reason for his dismissal and why he could not find additional work, although the hostage crisis in Iran made his situation more difficult.

“There was a backlash because of that,” Natasha says. “Nobody wanted to hire a Persian at that time. They had just found out they were pregnant with me, so he sold a little piece of land he had in California and used it to open a little restaurant downtown. city ​​in the Paul Brown Building.”

This restaurant, the Little Kitchen, was the Bahramis’ first foray into the food business. However, what they lacked in experience they made up for in their talent for flavor – Behshid’s palate and ability to recreate flavors was unmatched – and their willingness to do whatever it took to take care for their little girl. Still, it was difficult; the restaurant was so small there was no hood or oven, and the hours were grueling. Husband and wife got up at 3 a.m., swaddled their little girl, went to get their meat, seafood, and other supplies for the day’s service, and got to work before dawn. Business started slowly at first, but eventually built by word of mouth to the point that there was a regular line wrapped around the building for lunch service.

Behshid, Natasha and Hamishe in front of the small kitchen.

“The things they did to make it work were crazy,” says Natasha. “People don’t understand what they had to go through to make this happen. They never wanted to be restaurateurs, they did what they did to survive.”

It didn’t take long for Behshid to realize he had a deep passion for food, and he was eager to show off what he and Bahrami could do with a Persian-focused full-service restaurant. This vision, Cafe Natasha’s, opened in the University City Loop in 1993; for two years, the Bahramis managed both concepts simultaneously, rising before dawn to organize breakfast and lunch service at the Little Kitchen, then heading to Natasha’s cafe, where they worked late into the night .

Natasha’s coffee did pretty well from the start, but its big breakthrough would come when Joe Pollack, then food critic of the St. Louis Post-Dispatch, gave the restaurant a rave review. The Bahramis did not know who he was at the time; in fact, they didn’t even know what a restaurant review meant until one of their regular customers at La Petite Cuisine tipped them off after reading the review the day it appeared in the newspaper.

“Mom was in the small kitchen, and this woman said to her, ‘What are you doing?'”, says Natasha. “Mom told her she was working, and the woman said she had to close and go to Café Natasha because the review was going to have an impact. Dad didn’t believe her, but luckily mom went there. help because there was a queue in the street all night. We had no more food, but people refused to leave until they were fed.

More than just a review, Pollack’s words solidified Cafe Natasha’s reputation in the minds of St. Louis diners. As Natasha explains, the item was validation for the family, something that continued after the Little Kitchen closed in 1995 and a second concept, Kabob International, opened in the building where ‘s Cafe Natasha’s and the Gin Room.

The Bahramis closed Cafe Natasha’s Delmar location and moved it to its current location on South Grand in 2003, converting it with Kabob International to expand its offerings and allow Behshid to exercise his culinary creativity. With the family now only responsible for one restaurant, Natasha was able to exercise her own creativity, but not in the restaurant industry. She earned a graduate degree in international studies, moved to Washington, D.C. to take up a job in that field, and embarked on a successful career before being pulled into the industry by her passion for gin. . She embarked on learning all she could about the spirit, then returned to St. Louis in 2014, determined to create a world-class gin bar.

This bar, the Gin Room, has been a huge success, propelling Natasha into the international spotlight as an ambassador and expert in the category and serving as the foundation for her brand, Gin World. For the past eight years, the bar has operated alongside Café Natasha and breathed new life into it. As Natasha notes, the restaurant is more successful than it has ever been, but change is still needed. 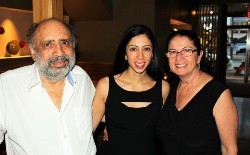 The Bahrami family has dedicated their lives to nurturing Saint-Louis.

However, this is not the end of the reign of the Bahrami family restaurants. Although Cafe Natasha’s is closing its doors, the Gin Room will remain open and will welcome a new restaurant concept in the coming months. While the family aren’t ready to release details of the new restaurant at this time, they will retain ownership of the concept and are confident the community will be thrilled with what they are working to create.

“We are so excited about this new restaurant concept,” says Natasha. “The Gin Room will be front and center, and the restaurant will synergize with it and work on what we’re doing.”

The Bahramis promise that details of the next restaurant will be released in the coming weeks. They also note that there will be a brief window after Café Natasha closes on April 30 where the Gin Room will temporarily shut down so the team can prepare the space for the new concept. More importantly, though, Natasha promises that this isn’t the end of the Bahrami family’s time in the St. Louis restaurant community, or even the last time diners will see her mother’s face at the address. South Grand; it’s simply a transition—a transition that frees her mother to get what she wants from the business and from life.

“We are delighted to continue to serve Saint-Louis; we love the city and love this community, and we’re so excited for this next chapter,” says Natasha. “Just as we went from the Petite Cuisine to Café Natasha, and they embraced us there, we hope they embrace us in our new endeavor. We are the same people with the same energy and the same passion. Hopefully our “eternals” will embrace us the same way they have for 39 years. Mom will always be there, but in a way that gives her the space to be a part of it however she wants. And there may even be a Café Natasha pop-up once or twice a year in the new restaurant. We want to do this for the St. Louis community because we wouldn’t be here without them support and love.”

We are always eager for advice and feedback. Email the author at [email protected]